Well it’s nearly new years eve 2016 and what better way to see the year out then with some retro tunes.

There are younger listeners finding their way to Elvis Presley, Johnny Cash and the Beatles.

One of these people is Michael “Memphis” Williams.

He is a product of his parents taste in music and remembers spending night after night listening to his dads 45’s.

From Johnny Cash to the Beatles, Elvis Presley to Chuck Berry, Michael was hooked!

And his love of this vintage music continues now.

In fact he is encouraging others to fall in love with music of these eras!

He has started a radio show called Rattlin’ Bones and Retro Tones on a community radio station in Melbourne Australia. But he doesn’t just aim to play old music.

Michael said it’s important to him to share modern rockabilly and retro rock and pop music as well.

They don’t get the air time on main stream radio and with a great music scene right around Australia his radio show is dedicated to embracing the old and the new!

He has also done a musical pilgrimage around the world visiting the homes and recording studios of musicians he loves.

Gracelands, a mysterious barbecue Elvis apparently carved his name into, the burnt down remains of Johnny Cash’s house, standing outside the gates of Jerry Lee Lewis’ and many more.

These visits put in context the lyrics and stories these artists write and Michael said great conversations can be started with other fans (even if they are members of the Memphis Police Force)!!

And we can’t finish by asking Michael about his Elvis room.

What started with a few posters and some cd’s has grown into an impressive collection!

And each item has a place in its own room in Michael’s house.

The key items, a silk shirt worn by the king of rock and roll and a collection of menus from Las Vegas and the food you’d get at his performances over the years. 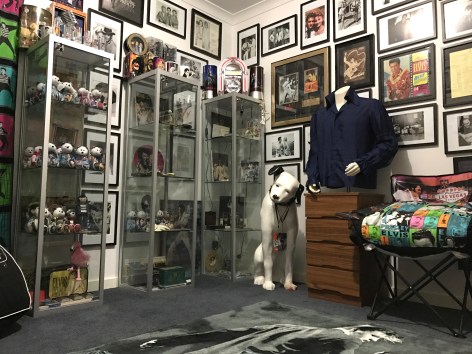 Michael says the collection will grow until the day he dies.

So while retro rock and roll runs through Michael “Memphis” Williams veins we did manage to end up talking about Taylor Swift and Katy Perry – why?

Find out in episode eight of This Retro Life!

Oh and make sure you listen to Rattlin’ Bones and Retro Tones Friday’s and 7pm and Mondays at 1pm AEST   stream the show here.