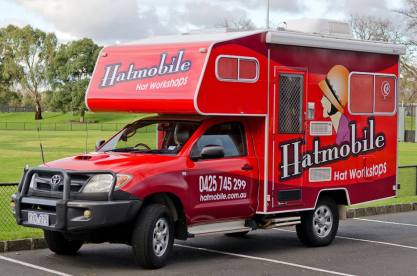 It was while living in rural Austria that Waltraud Reiner remembers her first hat.

Even though it belonged to traditional dress, it was considered “out there” because of it’s vibrant red colour.

But that wasn’t where she fell in love with hats. That happened years later in Australia.

Some might say it was fate that led Waltraud to a career as a milliner.

While working as a nanny in Melbourne she strolled past Magda Urban’s millinery shop while she was out with the toddler she was looking after.

Her reason for entering the store was simply to marvel at the creations. But she left with a job trial!

That weekend she sat out the back in the workshop hand stitching a hat stay.

As she worked the needle through the fabric making sure every stitch was perfect after yeas of looking she knew she’d found her calling.

She continued hand stitching for Magda Urban but eventually Europe called and she settled in London with her partner. 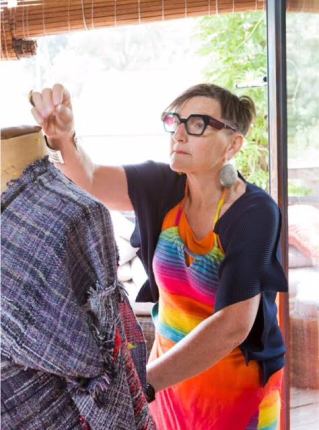 There she trained with the best milliners in the world including Philip Somerville, the milliner to the Queen, Queen Mother and Princess Diana.

But the calling of the land down under never left her or her Australian husband and they returned to Melbourne, back to her millinery roots by purchasing Magda Urban’s store.

Her dream was to be one of Australia and the worlds BEST milliners.

But an accident saw her husband Warwick paralysed. With two young children and  a business Waltraud’s life changed overnight.

This is where millinery and mental health met head on for the first time.

Looking back Waltraud knows she fell into a depression that was first broken at a craft convention in Geelong.

It was at the insistence of a friend that she went.

It didn’t matter she was in the doll making course she found a space to laugh, cry, complain and encourage and that’s when the idea of travelling millinery workshops were born.

Initially she’d fly into outback Australia to run workshops but soon wondered what would happen if she wasn’t restricted to communities with airports.

The trusty vehicle has made it down dusty back roads to communities around remote NSW and QLD and has opened up a brand new world for Waltraud.

Her workshops are not just a place to make hats or work on the loom it’s a safe place.

They become a place where everyone can create something and encourage others.

For Waltraud hats are the best metaphors for life.

Each day we all wear many hats. Colleague, mother, father, brother, partner, lover. The list goes on.

Waltraud says sometimes we need to take off these hats, wear them separately or focus on the fabric  they are made of and look at what that needs to maintain it.

Outback Australia is a remote place. It can be hours on dodgy dirt roads to the next major town so these workshops are incredible lifelines.

You can listen to our chat with Waltraud Reiner about the Hatmobile, art of millinery and so much more by subscribing wherever you find your podcasts or clicking here.

And make sure you give the Hatmobile some love on Facebook.

Move over #Ellen, this is the best #selfie ever! We are hard at work at new episodes for 2019 but wanted to reflect back just a couple of weeks ago when @kiahandley got to hang out with @damianmullin, @deanvegas1 and @mark66andrew. We were hoping to bring you their chat but Kia was a little nervous going on stage and got all caught up and forget to hit record (😐) so if you were there at @parkeselvisfestival lucky you! If not - we might try re-create it later in the year!
YES @mark66andrew!! What a show at @parkeselvisfestival
Are you even at an #Elvis festival if you don’t get a kiss? Thanks @tedtorresmartin
The house that started Nicole from @tiaraclaravintage’s passion with #vintage! Her #grandmothers house and decor. Who inspired your love of old things? . . . #podcast #podlife #podcaster #thisretrolife #retro #vintage #house #decor #design #vintagedesign #architecture #interiordesign
Orange, pinks, greens, browns and clashing patterns - we must be in the #1960s! Nicole from @tiaraclaravintage has #thrifting in her genes but what makes her want to help others find their perfect #vintage items? Find out in our latest episode. #subscribe, #listen and tell your mates! Link in bio or find us in your Favourite #podcast places! . . . #vintage #retro #thisretrolife #podcastlife #podlife #vintagefashion #60sfashion #60s #70s #1970s #70sfashion #retrofashion #collecting #vintageseller
“No matter where you are at @viva.las.vegas.vlv you’re surrounded by the #Rockabilly vibe we want to create. When you leave an event you hear our music playing throughout the whole #casino and that’s special” - @tomingramviva in our latest episode that you can find right now in your Favourite #podcast locations! . . #podlife #thisretrolife @viva.las.vegas.vlv #vivalasvegas #vegas #vintage #retro #pinup #music #rockandroll #festival #podcast #vintagelife 📷 @mcarthurscotty at #vlv18
Follow on WordPress.com